Wow it’s been a month since I last wrote a post, time really does fly doesn’t it! It’s been three months now since the bleed and I have noticed things are improving, barring my legs, but hopefully they will get better with time. I still get waves of tiredness, bits of nerve pain, I also lost a significant amount of hair, fooking typical! Grow it for years for it to fall out… 🤔 I was lucky in the fact it thinned all over and just didn’t come out in clumps, as I know that can happen too. Anyway, I’ve been putting treatments on it and hopefully it will start to thicken up again soon.  Anyway, enough of waffling on about that, back to what I do best, my creative endeavours. 🙂 I’ve really no complaints on that front, I’m loving it! I completed drawing no 7 for my colouring book and have nearly finished drawing no 8 ( pic below. ). I have also completed 2 watercolours this week,unheard of before!! I will get pics of them at some point, I would like to do some more first though, I have an idea for them… 😉

It’s my birthday next Sunday, I’ll be five point two!!! 😶🤔 I can’t complain though, as I’m on Brucie bonus points now aren’t I…. Lucky to be alive and certainly going to make the most of each and every day methinks! Crimbo is also approaching, so Ste put the tree up last night for me. ( Pic below. ) 😁 I know it’s a bit early, but why not eh. 😁 I might indulge in more decorations etc yet, maybe get a real potted crimbo tree for the back garden. 🙂 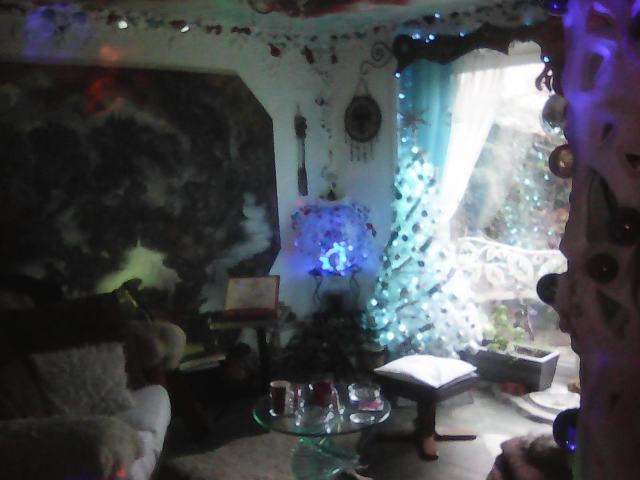 I’ve not done much on the singing and guitar front, I have a couple of songs flowing again, but my energy levels aren’t really up to doing all my songs yet. It’ll come back with time, I hope.

It’s a dull dreary wet day outside today, so I won’t be venturing anywhere, I think a long soak, some nice food and a bit of TV for me tonight, yeh that sounds like a plan. 🙂 Right on that note, best get back to my drawing. 🙂